ECOSAFIMED has been taking part in the NEXT MED conference 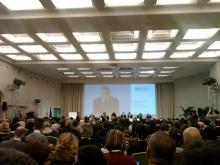 Conference attendants have shared experiences from each of the projects undertaken, and discussed priorities for the next edition of the programme, which from next year will be known as the European Neighbourhood Instrument (ENI).

The purpose of the project is to help develop an integrated policy in the Mediterranean by promoting responsible fishing practices on benthic communities. The project also promotes the exchange of information on good practices between the parties involved, with the aim of ensuring habitat conservation.
Previously, on 9 and 10 December, the ENPI-Ecosafimid Management Committee met in Genoa to discuss and assess all the questions involved in developing the project.

ONE YEAR SINCE START OF PROJECT
Over this first year of the project, trawl-free areas have been selected, which are the project’s study areas, together with zones of high and low fishing pressure within those areas. For each country, a series of métiers used in artisanal fishing has been defined for study.
Three oceanographic surveys have since been conducted in the countries involved, and two technical seminars have been held for exchanging scientific knowledge gained from the information obtained in these surveys.

In terms of dissemination, a website has been produced with all the information relating to the project (http://ecosafimed.eu/), meetings have been held with fishermen and informative material is being produced that will be distributed among fishermen from the countries involved in the project.

Up to 76 Mediterranean territories, which account for 110 million people, are represented in the ENPI programme. The countries participating are Cyprus, Egypt, France, Greece, Israel, Italy, Jordan, Lebanon, Malta, the Palestinian Authority, Portugal, Syria, Tunisia and Spain.

The programme’s objectives include promoting the socioeconomic development of the territories covered, environmental sustainability and promoting cultural dialogue between the different regions.
Beneficiaries of this programme include a great many institutions and organisations, ranging from local authorities to NGOs, associations, co-operation development agencies, universities and research institutes.