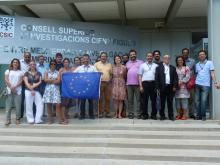 The ECOSAFIMED project of the ENPI CBC MED programme, co-ordinated by the Biodiversity Foundation of the Ministry of Agriculture, Food and Environment in Spain, promotes responsible practices in artisanal fisheries and the conservation of benthic ecosystems in the Mediterranean basin.

The Marine Science Institute of Spain’s Scientific Research Council hosted the meeting, aimed at discussing how to integrate project results into their relevant maritime activity programs to increase sustainability of artisanal fisheries in the Mediterranean basin.

ECOSAFIMED project partners and associates convened in Barcelona to hold a special meeting following the 5thSteering Committee meeting for the ECOSAFIMED project of the ENPI CBC "Mediterranean Sea Basin" Programme. This meeting represented an opportunity for the associates to take stock of the outputs and preliminary results of the project  after 18 months of implementation to evaluate the impact of artisanal fisheries on the Mediterranean benthic communities in the 6 study areas.

During the meeting, preliminary results gathered from on-board fishing surveys and oceanographic surveys carried out in Tunisia, Spain and Italy during 2014 and 2015 were assessed. Besides, partners and associates exchanged views about the elaboration of recommendations involving fishermen and stewardship entities to suggest management guidelines and the signing of marine stewardship agreements for a responsible fishing.

To conclude, associates have expressed their full collaboration with partners to support and disseminate project results, in particular the elaboration of sound and scientific-based management guidelines, considering the high potential for project impact and replicability among public institutions, fishermen and the general public at Mediterranean basin and global level.

Project associates from different organizations, aiming at protecting and improving the Mediterranean marine environment thus contributing to sustainable development, engaged from the beginning of ECOSAFIMED Project in a collaboration process aimed at promoting the exchange of information and experiences while contributing to the EU Directives and to the Barcelona Convention.

Project associates include national and international institutions namely the Regional Activity Centre for Specially Protected Areas (RAC/SPA) of the Barcelona Convention, the General Fisheries Commission for the Mediterranean (GFCM-FAO), the Mediterranean Protected Areas Network (MedPAN), the Ministry of Agriculture Food and Environment in Spain, the General Directorate of Fisheries and Aquaculture in Tunisia (GDFA), the Institute for Coastal Marine Environment (IAMC) in Messina (Italy), the cooperative of fishermen of Patti (SOC. COOP. PESCATORI MARINA) (Messina), the Tunisian Union  of  Agriculture and Fisheries (UTAP) and the International Union for the Conservation of Nature (IUCN).

ECOSAFIMED AND THE ENPI CBC MED PROGRAMME
With a budget of €1.9 million, the ECOSAFIMED project promotes responsible fishing practices and communication between researchers and the artisanal fishing sector, with the aim of helping to conserve marine ecosystems. The ultimate objective of the project is to produce a series of recommendations for managing the artisanal fisheries studied in the Mediterranean, to ensure their compatibility with good conservation practices for marine habitats.