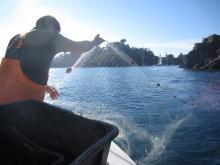 
The most striking aspect of the earth’s surface when seen from a great distance – on a flight, for example – is the preponderance of the colour green, as a result of the extraordinary abundance of vegetation that covers every type of environment, with the exception of deserts and mountain peaks. Either grouped together in forests or isolated in great savannahs, trees are the most characteristic feature of the landscape where human evolution has taken place, to the extent that they are of considerable symbolic value in our culture.
If trees represent the environment on dry land, why can they not also symbolise the inaccessible depths of the sea? We have long fantasised about forests in the depths of the abyss and the 18th-century discovery of zoophytes, animals resembling plants, only reinforced this imaginary world.
Today we know that such forests really do exist, but are made up not of plants but of animals – gorgonians, black coral and hydrozoa – and that the structure of the marine landscape is eminently animal. If the botanical world reigns on dry land, the zoological world does so under the sea.
The influence of these arborescent organisms on the deep-sea ecosystem is enormous. Their structure gives the marine substrate a three-dimensional character, increases the potential for new environmental niches, attracts a wealth of associated small invertebrate fauna, and favours the development of abundant quantities of high-quality fish. It is precisely the variety of life that they host that poses such a serious risk for undersea forests, particularly those located a certain distance from the coast and in isolated shoals at depths of less than 70-100 metres.

Artisanal fishing practices, using gill nets or long-line fishing, occur mainly around rocky shoals populated by corals and other organisms structured to capture fish and seafood that sell for a high price, such as lobster, John Dory, monkfish and red snapper, as well as species such as red sea bream at greater depths. In environments subject to the action of seabed currents such as these, fishing equipment tends to attach to gorgonians or the rocks around them. Their branches break off, and then they are often lost, turning them into ghost nets that continue to capture fish that no-one collects. Weighed down by the fouling that settles on them, the equipment gradually settles on the sea bed, thereby covering and suffocating coral communities. In this way, along the Tyrrhenian coast and in the Gulf of Naples and the Ligurian Riviera in particular, Italian deep-sea shoals are gradually being impoverished, with dramatic consequences for artisanal fishing as well.

A two-year cross-border research project has been set up to evaluate the scale of this phenomenon and promote responsible artisanal fishing practices that can safeguard the benthic ecosystems of the Mediterranean Basin, funded by the European Union and co-ordinated by the Spanish Ministry of Agriculture, Food and the Environment through the Biodiversity Foundation (Fundación Biodiversidad), entitled “Conservazione di ecosistemi e pesca artigianale sostenibile nel bacino del Mediterraneo (ENPI-ECOSAFIMED)”, involving joint working between Barcelona’s Institute of Marine Sciences-CSIC, the Tunis National Institute of Marine Science and Technology, and the University of Genoa.
The aim is to compare fishing hauls and damage to seabed ecosystems using a range of different equipment at depths of 50 to 200 metres in areas where trawl fishing is absent and only artisanal fishing is used. To this end, a series of fishing experiments will be carried out in Italian seas in the Patti Gulf and the Pontino archipelago, with the aim of assessing both the catch and the benthic bycatch. Finally, areas subject to intense fishing will be compared to less intensively fished areas by means of direct observation using remotely operated vehicles (ROVs).
It is important to remember that the ultimate objective of the project is to draw up a series of management recommendations for Mediterranean artisanal fishing fleets in order to ensure the compatibility of fishing activities with good marine habitat health. Fundamentally, the project considers environmental integrity to be the most precious resource of sector operators, and seeks to raise awareness with maps and high-resolution images of fished sea beds, showing both the area’s beauty and the critical issues involved. It is fundamentally important that the opinions of fishing communities should be integrated into the scientific data, in order to draw up guidelines for fishermen on choice of site and fishing equipment that can maximise hauls while respecting the environment and safeguarding the equipment used.

“This publication/website has been produced with the financial assistance of the European Union under the ENPI CBC Mediterranean Sea Basin Programme. The contents of this document/website are the sole responsibility of Fundacion Biodiversidad-University of Genova and can under no circumstances be regarded as reflecting the position of the European Union or of the Programme’s management structures.”


“The 2007-2013 ENPI CBC Mediterranean Sea Basin Programme is a multilateral Cross-Border Cooperation initiative funded by the European Neighbourhood and Partnership Instrument (ENPI). The Programme objective is to promote the sustainable and harmonious cooperation process at the Mediterranean Basin level by dealing with the common challenges and enhancing its endogenous potential. It finances cooperation projects as a contribution to the economic, social, environmental and cultural development of the Mediterranean region. The following 14 countries participate in the Programme: Cyprus, Egypt, France, Greece, Israel, Italy, Jordan, Lebanon, Malta, Palestine, Portugal, Spain, Syria (participation currently suspended), Tunisia. The Joint Managing Authority (JMA) is the Autonomous Region of Sardinia (Italy). Official Programme languages are Arabic, English and French (www.enpicbcmed.eu).”