Inicio/Prensa/Actualidad/Spain, Italy and Tunisia evaluate the progress of the ECOSAFIMED in Tunis

Spain, Italy and Tunisia evaluate the progress of the ECOSAFIMED in Tunis 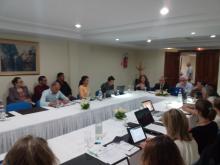 The ECOSAFIMED project of the ENPI CBC MED programme, co-ordinated by the Biodiversity Foundation of the Ministry of Agriculture, Food and Environment, promotes responsible practices in artisanal fisheries and the conservation of benthic ecosystems in the Mediterranean basin.

The Marine Science Institute of Spain’s Scientific Research Council, the National Institute of Marine Sciences and Technologies of Tunisia and the University of Genoa from Italy completed the field surveys as planned and met to discuss current state and the progress of the project.

Spain, Italy and Tunisia convened in Gammarth to hold the 4th Steering Committee meeting for the ECOSAFIMED project of the ENPI CBC "Mediterranean Sea Basin" Programme.

Representatives from all the partners as well as from the Directorate-General of Fisheries and Aquaculture of the Ministry of Agriculture of Tunisia, the National Contact Point of the European Commission in Tunisia and the National Agency for the Promotion of Research attended the meeting.

After nearly 18 months of project implementation, this meeting aimed to assess the progress and to define the next steps to follow. In this regard, partners paid special attention to the analysis of the previously collected data during the 6 oceanographic surveys and more than 50 days of fishing operation, which were the main activities carried out during the last months. They also exchanged views on the definition of the common final variables to evaluate the impact of artisanal fishing gears on benthic communities in the study areas.

All the partners made proposals on how to continue involving fishermen in order to improve their practices in artisanal fisheries.

To conclude, project partners planned the following steps to be achieved within the framework of the project, further focusing on data analysis, guidelines drafting and informative activities as a key point to transmit the knowledge gained among both sides of the Mediterranean basin together with public institutions, fishermen and general public. Furthermore, apart from organising a congress by the end of 2015, it is also foreseen to issue an informational video within the framework of the project as well as a technical publication.

ECOSAFIMED AND THE ENPI CBC MED PROGRAMME
With a budget of €1.9 million, the ECOSAFIMED project promotes responsible fishing practices and communication between researchers and the artisanal fishing sector, with the aim of helping to conserve marine ecosystems. The ultimate objective of the project is to produce a series of recommendations for managing the artisanal fisheries studied in the Mediterranean, to ensure their compatibility with good conservation practices for marine habitats.